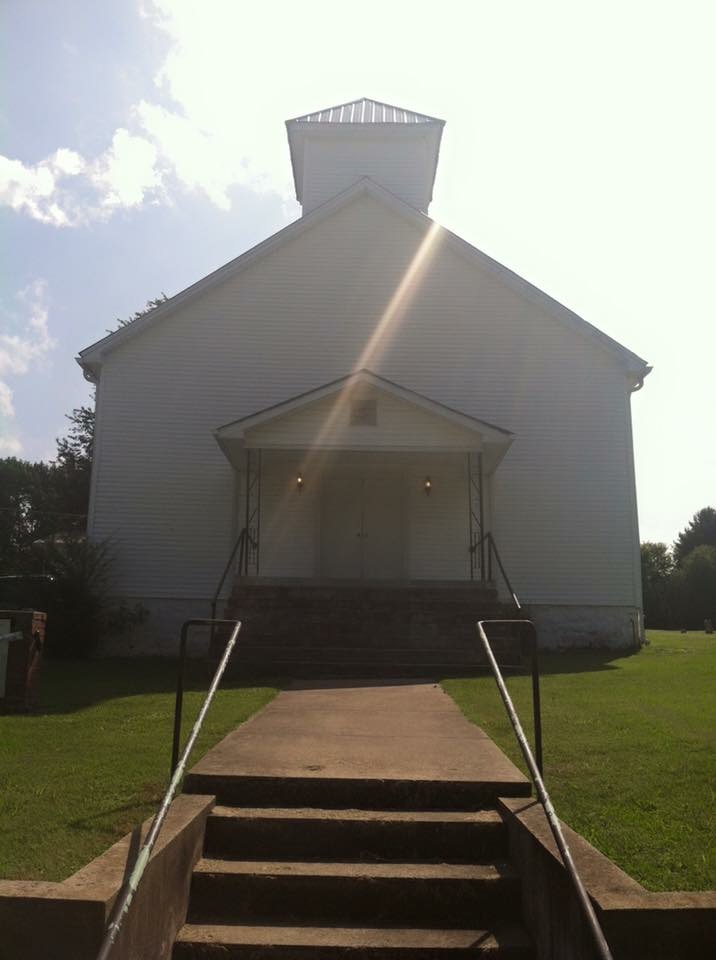 Through “Preaching” we proclaim the Death, Burial, and Resurrection of our Lord and Savior Jesus Christ.

Then “Reaching” out to the lost and show the love of God and what He did for them through Jesus Christ.

“Teaching” them how to live a sinless, selfless, satisfying and saturated life through the power of the Holy Spirit.

And Jesus came and spake unto them, saying, All power is given unto me in heaven and in earth. Go ye therefore, and teach all nations, baptizing them in the name of the Father, and of the Son, and of the Holy Ghost: Teaching them to observe all things whatsoever I have commanded you: and, lo, I am with you alway, even unto the end of the world. Amen.    Matthew 28:18-20
First Baptist Church History

We have very little recorded history of this church, except a program from a 97th anniversary, and word of mouth from some members who have long since gone on to their great reward. However, we can tell you that it seems this land was donated to freed slaves of a man by the name of Thomas Manion in what we believe to be the year 1851, for the purpose of erecting a place of worship. Slavery was still very much alive in the state of Kentucky at the time, so it is logical to say that our church was started by slaves and freed slaves. It seems that some time passed before those slaves got enough money to build their first church building, in a location known as Baptist Hollow. We believe this to be where the present street Baptist Hollow got its name. However, the only thing known about that building is that some years later it was destroyed by fire. That is when another Allen County family donated the land for this building, and we estimate this building to be at least 100 years old.

There have been many former pastors; most have gone to their eternal home. Some that some of us can remember are the Reverends A. Bell, Tom Walker, G.H. Murrell, W.K. Richardson, Richard Gordon, C.P. Bridges, J.E. Butts, A.L. Barnett, George Allison, and Roscoe Robey III. Some past deacons have been J.P. Smith, Virgil Thomas, Marvin Ponds, Prentice Hammock, John Soules, Burnis Bush and the late Deacon L. C. Starks. Presently there are four active deacons in Brothers James Sears, John Isable, Harold Isable, and Danny Soules. We also have one deacon in training, Mr. Jerome Wilson. Mr. Lee Glenn served as a trustee of the church until his death. Some past officers of other ministries are Sunday School Superintendents: Brother Garnett Heater and Burnis Bush. Presently Deacon James Sears is superintendent. BTU presidents have been Sis. Mattie Carpenter, Sis. Lois Ponds Gumm, Sis. Evangeline Soules, and Sis. Lorene Glenn. Past choir presidents include Sis. Nintha Ponds, Sis.Lorene Glenn, Sis. Mary Sears, and Sis Diana Wilson. Sis. Danielle Brown currently serves as the Choir Director. Sis. Diana Wilson is Missionary President, and the current president of Our Association’s Missionary Circle, Circle Number One. Past presidents of the Missionary include Olivia Pipkins, Lorene Glenn, and Gladys Ruth Brown. Sis. Irene Calvert was our church pianist to her death. Other musicians include Deacon Craig Offutt of Macedonia Baptist Church, and Sisters Delores and Victoria Kemp. Our current Minister of Music is the Rev. Tim Stanley. He is a blessing in so many ways to this congregation as he is not only a phenomenal and anointed musician but also a prolific and powerful preacher. The church Mothers include Sisters Ruby Brown and Willie Hammock. Sister Annie Murrell and Sister Lorene Glenn serve as Mothers Emeritus. There have been many other faithful members who have served untiringly whenever and wherever they are needed. Some of these include Sis. Tillie Thomas, Hallie Hammock, Dora Isable, Ethel Thomas, Ruby Starks, Louise Dixon, and Evangeline Soules. We are glad to say that all our members are willing to whatever is needed when they are called upon. We know this is by the grace of God, for there was a time in the 80’s when the church seemed headed for certain destruction. At that time for a period of two or three years, there would be only the pastor, his family and possibly two or three members at Sunday school and possibly two or three more at morning worship. At one time for a brief period in 1986, the church doors were closed because we had no pastor and what appeared to be no interest in the future of the church. However, those faithful few continued to pray and ask God for his guidance. And just as he did for the children of Israel, he was our Jehovah Jireh, our provider in a most unusual way.

By what some would mistake as fate, but we know to be the Favor and Guiding Hand of The Most High God, one of our members met a gentleman by the name of George Allison at a barbershop and began to discuss the church’s situation with him. And this gentleman told her that he was a minister with no pastorate, and he offered to come and help us at any time. Rev. George Allison did come to help for several Sundays before the church decided to call him as Pastor. He served for six years until the Lord unexpectedly called him home. This year, we are honoring the service that Rev. Allison provided to the congregation of First Baptist Church 25 years ago. It was his sacrifice and compassion that helped this church to ensure her legacy as the oldest black Baptist church in Allen County Scottsville. Without God using him, and him being a willing vessel first to volunteer and secondly, to Pastor this small and struggling church, the doors could have possibly never opened again. According to Mary Sears, who served as Church Clerk, it was his personality that won the hearts of the members. He treated everyone the same, and we all liked him.” It was during his Pastorate that the church doors reopened, and although the church may have been counted out by the surrounding community and certainly while the devil thought he had stopped the show, God began to build again on a solid foundation that He established so many years ago. When Pastor Allison passed away in December of 1993, we again faced the possibility that our church might be diminished. However, thanks be to God, the deacons got busy and calling different ministers to fill in. During this time, we got a call from a young man by the name of Roscoe Robey III, expressing an interest for an appointment. He was given that appointment. Because of his interest and our desire to have him return we took this as confirmation that God wanted him to be our new Pastor. On February 1, 1994, the deacons called a meeting and it was decided that Rev. Robey would be our new Pastor. We give thanks to God that he willingly accepted the call. Under his leadership, the church has continued to thrive, with our membership increasing, including several improvements to the church, and most of all we have continued to grow spiritually. Our current Pastor, the Reverend Barrett Wright came to us (January 2010) at a time, when we were unsure of the future that GOD had in store for us. It has been almost four years since He came to us that November and told us that we needed to “Move Forward.” The word of God that he brought to us was so timely and relevant to what we were going through. With the army of Pharaoh behind you, mountains on every side, and the Red Sea in front of you, what will you do? You will move forward. In faith. Although our steps have been slow, we have continued to move forward. And God has blown our minds in what He has done. And I don’t believe that He is finished yet. The building you are sitting in may be over 100 years old, but it doesn’t look the same. The pews are redone (padded). The walls are drywalled, the fellowship hall has been renovated and dedicated. Our God is not through with us yet First Baptist. The church held its First Black History month program in its 160th year of existence, the Church was chronicled this year by Western Kentucky University’s Historical Program during its 161st. There is life yet in this place! During the past several years, God has tested the faith of the First Baptist Church family, with first one thing and then another, from death and sickness to trials within several families of the church, but through it, all God has been so good. He didn’t do those things to hurt us or punish us, but to allow us to trust him like we never have before. He has kept us when we wanted to give up and throw in the towel. We know that what the enemy means to destroy and wants to use for evil, God will use to bless us. He didn’t promise that each day would be easy, but He did promise to never leave or forsake us. God in his infinite wisdom allowed our trials, hurts, disappointments, to be the very thing that brought this church family together in a way that it has never experienced before. We don’t just know that God is good, we’ve experienced his goodness, we don’t just know that He is our provider, he’s been Jehovah Jireh to us. We don’t just know that God is sovereign, we’ve been a witness to his Almighty power. He has brought us from the miry clay and set our feet upon the solid foundation of his word. And most of all we know that God is so good and worthy to be praised. We know full well that he will bring to completion the good work that He has begun in us. There have been so many members that have played their part to ensure our legacy and done what God has asked them to do. Our prayer is that he will continue to bless this little church as he has for the past 167 years.